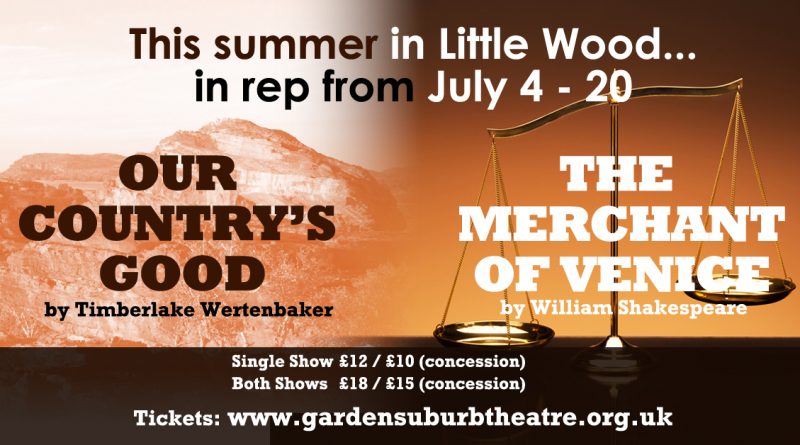 This July, Garden Suburb Theatre will be returning to one of our favourite venues – the Little Wood Open Air Theatre, NW11 6QS (entrances from Denman Drive, Oakwood Road and Addison Way), for our annual set of summer performances.
But this time there’s a big difference: we’ll be putting on not one but TWO shows, so there’ll be plenty of opportunity to experience some top-notch outdoors amateur theatre.

A pair of talented casts will be getting their teeth into The Merchant of Venice by William Shakespeare, directed by Diana Bromley, and Our Country’s Good by Timberlake Wertenbaker, directed by Kayne McCutcheon. These two very different plays will be running in rep, with nine performances each between 4th and 20th July – and as an added extra, if you book to see both shows we’ll be running a Buy One Get One Half Price deal which will give you great value for money as well as the chance to see two moving, exciting and engrossing pieces of theatre.

The Merchant of Venice probably needs no introduction – this Shakespeare classic explores the universal and always relevant themes of justice, intolerance and law, alongside a number of romantic subplots. We’re really looking forward to bringing this well-known text and characters like Portia and Shylock to life in a new, exciting way. Anyone who has seen one of Garden Suburb Theatre’s previous Shakespeare productions (like Measure for Measure last year) will be aware of just how well his plays work in the Little Wood Open Air space, so this is one not to be missed.

Our Country’s Good, by female playwright Timberlake Wertenbaker, tells the amazing true story of the first penal colony in Australia, focusing on a group of convicts who put on a play under the guidance of Second Lieutenant Ralph Clark. With a variety of colourful characters based on real people, actors playing multiple roles, and a brilliant mixture of comedy and tragedy, this dramatic and insightful play shines a light on the power of theatre to combat prejudice and bring people together.

The Merchant of Venice:

Meet the Our Country’s Good Characters

Scroll down for more info on the fascinating characters of Our Country’s Good (often based on real people) and the clever actors playing more than one at a time!