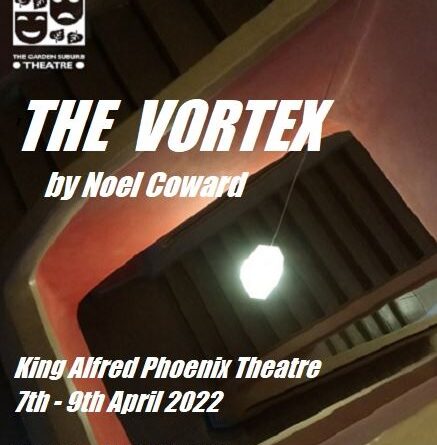 Audition for vacant parts in THE VORTEX

We held an audition for The Vortex in June 2020 but the performances have been postponed until April 2022 because of the pandemic. This audition is for the parts that have become vacant because those cast cannot make the new dates.

(In the event that any of them do find themselves able to take part before the audition their part will not be auditioned.)

We will be rehearsing on two or three evenings on weekdays and on Sunday afternoons. Weekday rehearsals will initially be on Tuesdays and Thursdays starting in February; subsequently there may be some on Wednesdays as well. Rehearsals will be held at the Free Church Hall, Northway, NW11 from 8pm to 10.30pm on weekdays and 3pm to 6pm on Sundays.

The Vortex is a play for the 20s. It was Noël Coward’s first success in 1924 and while on the surface it glitters with sharp repartee, the bitter truth that lies underneath reflects the characters’ struggle to come to terms with the emptiness of society after the trauma of the First World War. It deals head-on with escape in drugs – shocking then and relevant today – and hints at a deeper conflict with homosexuality. The complexities of the parent/child relationship and acceptance of our inevitable decline into old age are other over-arching themes. the show.

Characters to be auditioned (with playing age):

As with all GST productions we cast without regard to race, colour, religion, national origin, gender identity or expression, sexual orientation, or disability.

We are also looking for someone to play the piano and sing as part of the production. Please contact Colin if you would be interested in this.

Please note that, although you do not have to join the GST to audition, all actors in a GST show are required to be members.

Please let us know you’ll be coming by emailing vortex@gardensuburbtheatre.org.uk in advance.

Audition pieces can be downloaded by clicking the buttons below

MEET THE CAST: Ensemble! Our awesome Ensemble are